When my wife and I found out that Jerry Seinfeld was going to be performing about 45 minutes away from us in Athens, Georgia, my first thought was, “Why Athens, Georgia?” and my second thought was, “Great! Let’s go!”
So, my wife got online and bought a couple of tickets. Shock Alert: They weren’t cheap. Not by a long shot. But we figured, when will we ever get the chance to see Jerry Seinfeld live again? So we dug deep, clicked “purchase,” and told our kids they’re going to have to put off going to college for a while.

A month or two went by that was filled with work, eating junk food, watching TV,  and visiting the doctor to find out why we feel bad all the time. But before we knew it, it was the day of the show! We 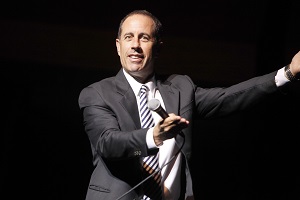 made the trek to Athens and arrived at the venue a tad late, so the lights were already dimming when we rushed into the auditorium and got to our seats.

When Jerry took the stage, he was welcomed with thunderous applause that screamed “Wow! A real celebrity, right here in the South!” As expected, Seinfeld knocked it out of the park with lines such as “We must never forget why children are here. They are here to replace us. Their first words are, ‘Mama, Dada, Bye-bye!’” and “I was reading that the new category of drinks that is popular right now is alcoholic coffee. How rare is that set of circumstances, where you need to be whatever the opposite of tired and sober is?”

As I watched his show, I noticed that Jerry seems looser than ever. His routines are just as well-crafted, with punchlines containing exactly the right wording with precisely the right tone and delivery. But the thing that really stood out to me was that he is much more physical these days, using his whole body to illustrate the point he just made, and roaming the entire stage instead of standing in one place the whole time. He punctuates his bits with wide-open gestures and movements that enhance his bits rather than detract from them.

I think this is a pretty amazing thing, considering that Seinfeld was already hugely successful in his craft. He could’ve reasoned that his comedy style is what got him this far and clung to it, but instead, he chose to explore, stretch, engage risk, and grow. Now, in my humble opinion, his act is better than ever. He’s growing, honing his craft, and exploring his potential.

Some people might look at this and think, “Well, sure. He’s got the time to work on his craft and improve. He’s Jerry Seinfeld!” But I think the truth is that he’s Jerry Seinfeld because he’s the type of person that has invested—and continues to invest—the time and effort improving his product and exploring his potential.

How about you? Are you engaged in the steady pursuit of improving who you are and what you do? Success doesn’t happen by accident. It takes focus, determination, and consistent daily effort. What one thing will you do today to stretch and become better than you were yesterday? How will you demonstrate to the world that you are a person that can, and will, stand and deliver?

© 2016 Charles Marshall. Charles Marshall is a nationally known humorous motivational speaker and author. Visit his Web site at www.CharlesMarshall.net or contact him via e-mail at charles@charlesmarshall.net.

View all posts by Charles Marshall →

I look forward to connecting with you.

3 Responses to Some Kidding Aside – Jerry Seinfeld Motivational Story

Check out all my events here!